From Montreal to Îles-de-la-Madeleine

Driving from Montréal to the Îles-de-la-Madeleine: an electric escapade by the Electric Circuit team

We get a lot of questions about how fun and easy it is to drive long distances in an electric car, especially outside the province. In Québec, the Electric Circuit charging infrastructure is well-established and ever-expanding, and partnerships with other charging networks (ChargePoint, FLO, etc.) were recently created.

But what’s it really like to go on a road trip in an electric vehicle?

We made the most of the week leading up to Canada Day to see for ourselves and share our experience traveling from Montréal to the Îles-de-la-Madeleine in an electric car.

Setting off in our trusty all-electric Chevrolet Bolt decked out in the colors of the Electric Circuit, we covered over 2,600 km round-trip on roads in Québec, New Brunswick, Prince Edward Island and the Îles-de-la-Madeleine. 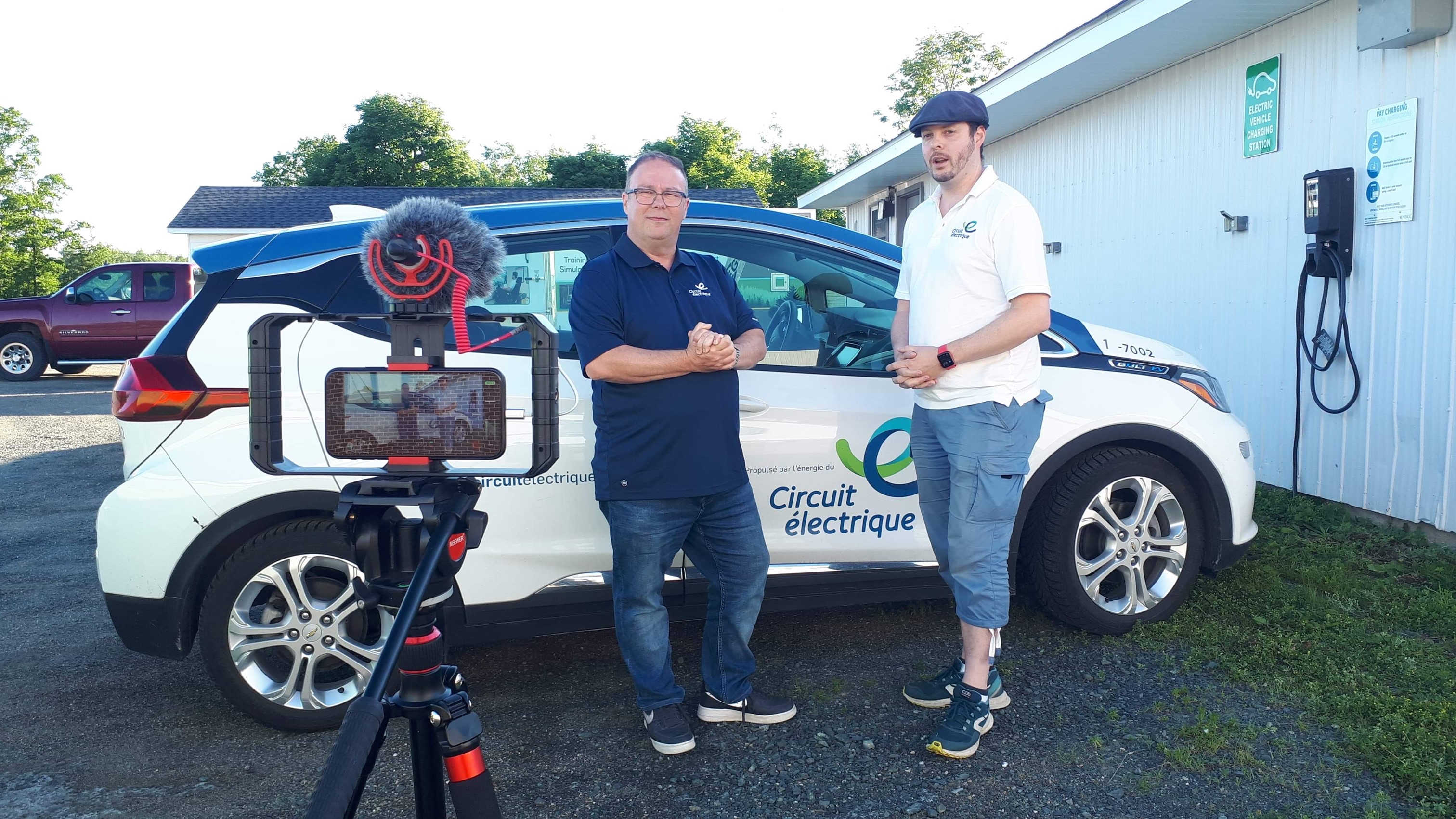 Now that we’re back, we can confirm that the adventure was practically the same as driving a gas vehicle and definitely less expensive.

For a fun road trip in an electric car, preparation is key! 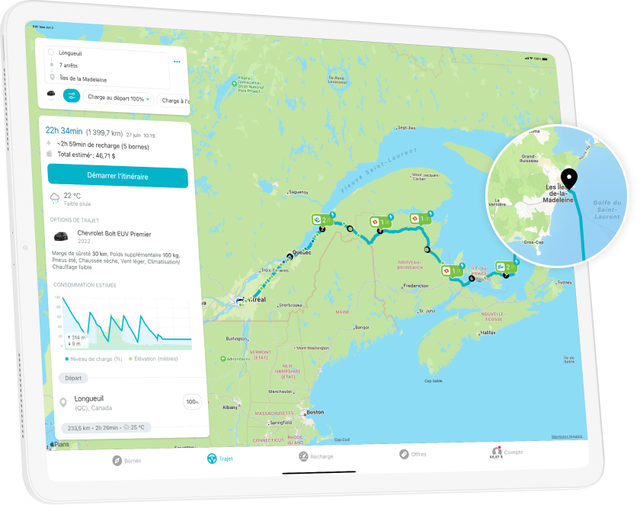 Before heading out, we mapped our itinerary to avoid unpleasant surprises and unnecessary stress and plan our stops based on our meal breaks.

The trip planner—an essential part of the Electric Circuit mobile app—suggested an itinerary with all our stops and the driving times to get to each one.

Taking into account the capacity of our car (a Chevrolet Bolt), our starting point (Sainte-Julie, on Montréal’s south shore), our initial state of charge (SOC) of 100%, the number of travelers (3) and the extra weight (about 50 kg in luggage), the trip planner determined five stops on day one as we made our way to Miramichi, New Brunswick, and then another two stops en route to Cap-aux-Meules.

We made sure to book hotels with charging stations for guests so we could charge our vehicle overnight.

With our smart phones and Electric Circuit membership cards in hand, we were ready to hit the road!

The first day of our road trip began in Québec, where we made three stops at 50-kW fast-charge stations. In our 2017 Chevrolet Bolt, whose brand-new battery had a range of about 400 km,

it was more cost-effective and efficient for us to use 50-kW fast-charge stations than their 100-kW counterparts since the charging power never exceed around 55 kW. It made more sense to leave the 100-kW charge stations for the vehicles that needed them.

In those late June days, our concerns about having to wait at charging sites quickly dissipated. Even as the summer holidays were getting underway, the fast-charge stations we used were almost all free when we arrived. There were always several charging stations at the sites where we stopped in Québec, and none were out of order.

In Dégelis, we charged our car and headed to New Brunswick, where we stopped at a charging station in the NB Power network, which is one of the Electric Circuit’s partner networks. After leaving Québec, we realized that the network was less extensive and that charging sites often had only one station. Luckily, we never had to wait.

The Electric Circuit app covers areas outside Québec. The trip planner considers the charging stations in partner networks, and the app makes it simple to start a charging session.

Day one ended in Miramichi, where we tucked in for the night before heading to Souris, Prince Edward Island, to catch the ferry that would take us to the Îles-de-la-Madeleine. 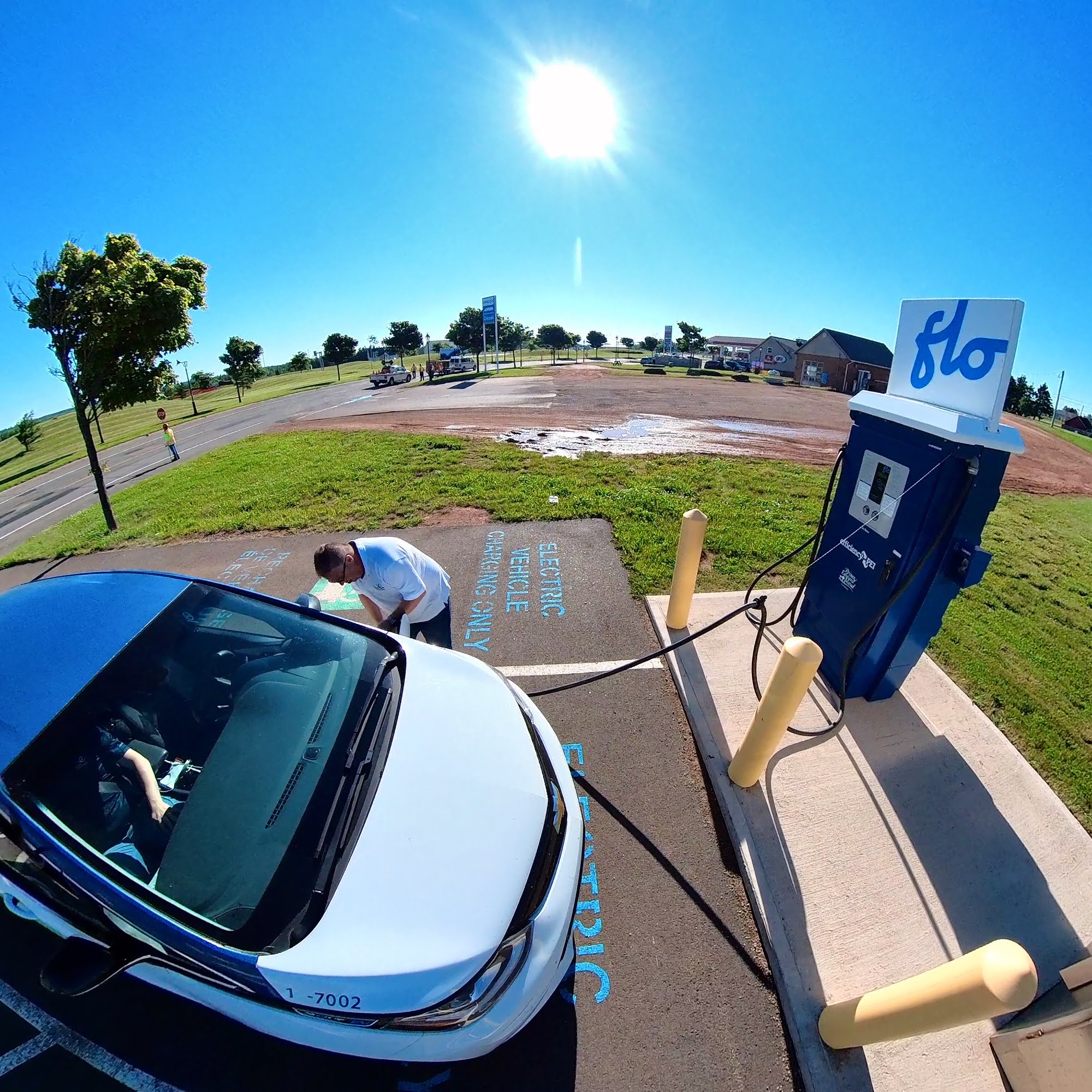 Day two started at the crack of dawn. We made our way to Souris, Prince Edward Island, and boarded the ferry to Cap-aux-Meules. We’d booked our crossing about a month in advance, since spots on the ferry are very limited, especially in summer.

Since leaving Québec, we’d only stopped once at a charging station in the FLO network, which is an Electric Circuit partner on Prince Edward Island.

As of July 2022, there are about 10 fast-charge stations operated by the ChargePoint and FLO partner networks. According to the trip planner, we had enough range to drive straight on to Souris, but we decided to stop in Borden-Carleton to be on the safe side.

There, we relied on the same principle as in New Brunswick: we started the charging session using the app and an Electric Circuit membership card.

We crossed Prince Edward Island from west to east and arrived in Souris at around 11 a.m. with an SOC of 31%. That was more than enough to take the ferry to the Îles-de-la-Madeleine.

We boarded the ferry right on time for our five-hour trip to our final destination: Cap-aux-Meules! 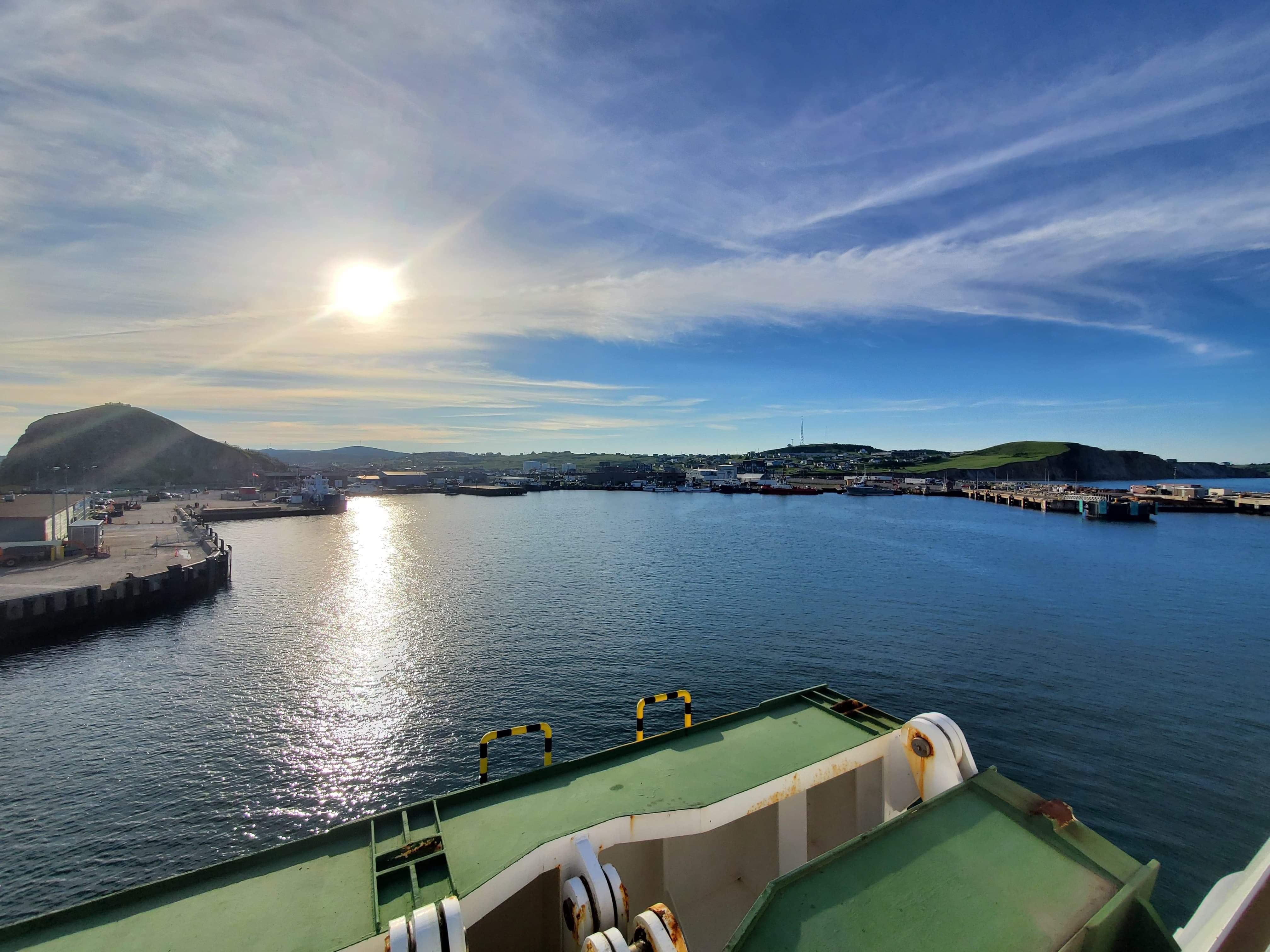 When we disembarked, we found the Electric Circuit and charged the car at a fast-charge station in Cap-aux-Meules before exploring the island!

By comparison, the same trip in a gas-powered vehicle that consumes 8 L/100 km would have cost $245.28 in gasoline, including the full tank we’d have started with. That’s 3.5 times more expensive.

In the end, our road trip in an electric vehicle was quite easy. And it was such a great experience. With a little preparation and planning, you can enjoy an escapade that’s environmentally friendly and just as fun for less!

If you don’t own an electric vehicle yet, why not rent one? There’s no better way to try one than a trip on the open road!

Overview of our road trip in an electric vehicle (one way, Sainte-Julie – Cap-aux-Meules)